The Heritage Cruises Binh Chuan was also built to commemorate Bach Thai Buoi, who has been known as the “King of Ships” in Vietnam. 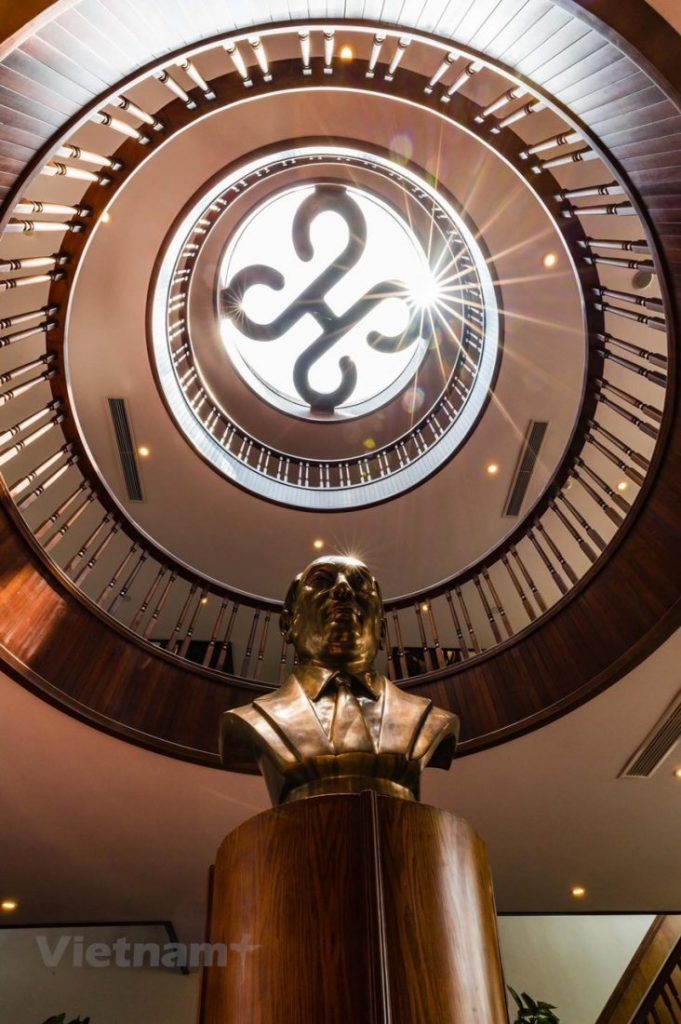 Although Bach Thai Buoi’s parents were poor, they sent him to school to learn both Quoc Ngu, the Vietnamese language script, and French. Every day, Bach Thai Buoi collected firewood from the banks of Nhue River, sold it, and earned money to start his business. Bach Thai Buoi was always interested in machinery, so in 1894 he went to work in a workshop to learn how to organise and manage production. Shortly after that, he went to France to participate in an exhibition in Bordeaux. On returning to Vietnam, a new opportunity presented itself when the Indochina Railroad Company needed a large amount of wood for the construction of the Paul Doumer Bridge. In the following years, he had earned much money and accumulated extensive experience in the business. 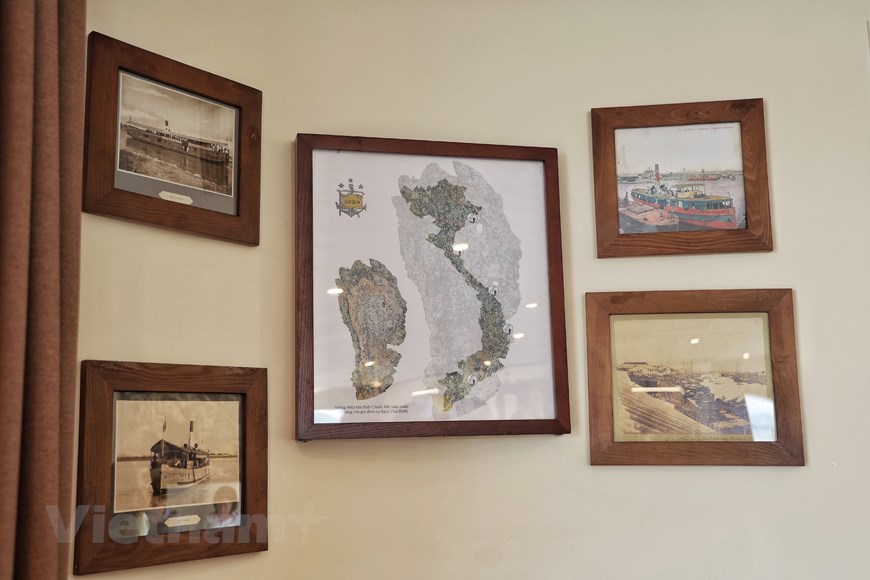 Bach Thai Buoi realised that the waterways between Nam Dinh, Hanoi, and Ben Thuy were always crowded, and, if developed, could bring greater benefit to the region. In 1909, the Marty-D’Abbadie Company had just finished its contract with the French state for these waterways, and Bach Thai Buoi seized the opportunity and immediately hired three of their ships. He gave them the Vietnamese names Phi Long (Dragon), Phi Phuong (Phoenix), and Fai Tsi Long (Bai Tu Long). He faced serious competition from the Chinese merchant ships. The French had been unable to take them on, but Bach Thai Buoi did so and started to run the Hai Phong route as well, expanding again within just two years. 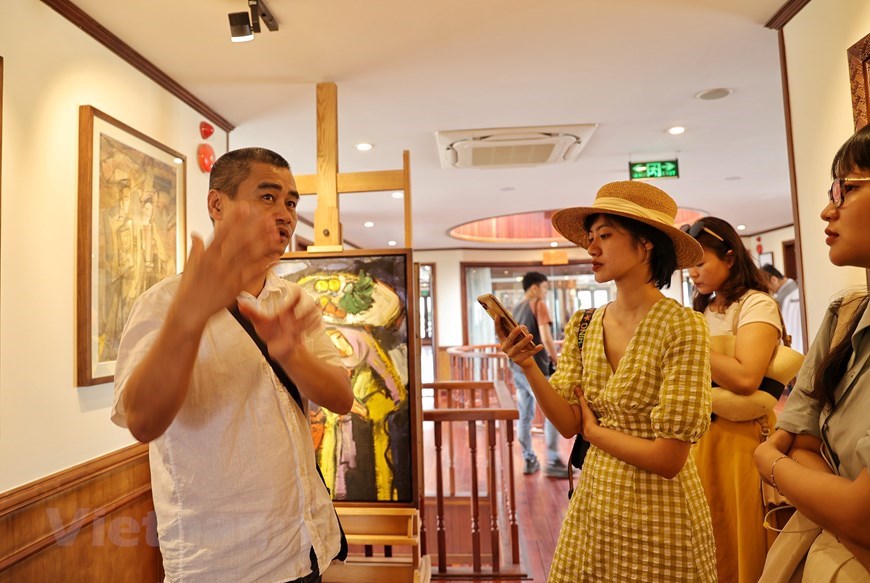 Bach Thai Buoi had overcome fierce competition, and his contemporaries hailed him as the “Lord of the Tonkin Rivers.” However, his dream was to sail across the ocean. His next milestone was when he designed and built the largest ship in Vietnam at that time. On September 7, 1919, Bach Thai Buoi launched the Binh Chuan ship, which sailed from Hai Phong to Saigon and created new markets and new businesses. With his abundant wealth, he quickly captured the market. It seemed that nothing could stop him, and he started to make plans to expand his business even further, but unfortunately, he passed away in 1932 in Hai Phong at the age of 57. He was buried in Uong Bi coal mine area in Quang Yen (Quang Ninh province). 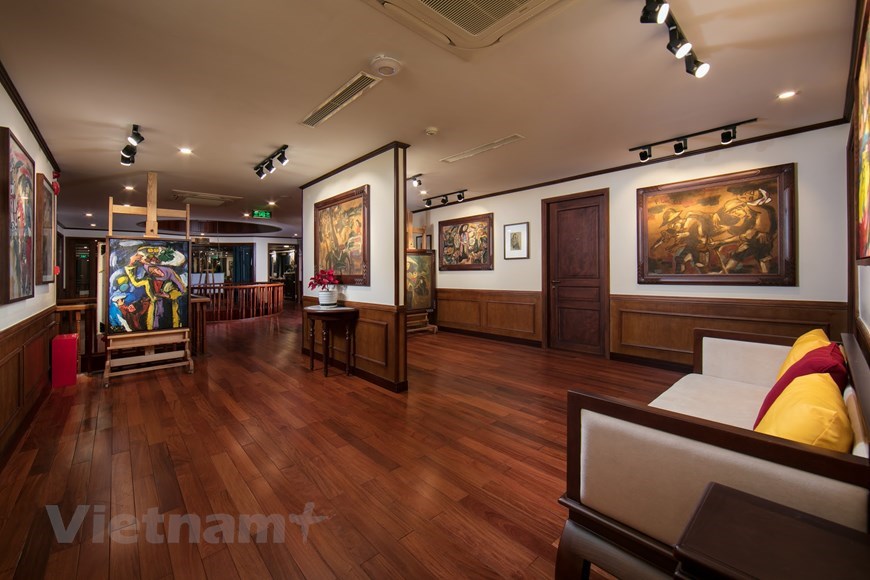 Besides the head office in Nam Dinh, he opened a branch in Ben Thuy in June 1914 and another in Hanoi in August, which can still be seen in front of the Clock Pillar near the old Paul Doumer Bridge (now Tran Quang Khai Street). Bach Thai Buoi’s ships dominated the waterways sailing between Hanoi, Hai Phong, Nam Dinh, Tuyen Quang, and Cho Bo. In 1916, Bach Thai Buoi officially established his business on the banks of the Tam Bac River in Hai Phong, the Bach Thai Buoi Ocean and River Transportation Company. As the years passed, the company opened more branches, and his fleet expanded from the original three to thirty ships. The passenger vessels’ capacity varied dramatically, carrying between 55 and 1,200 people. 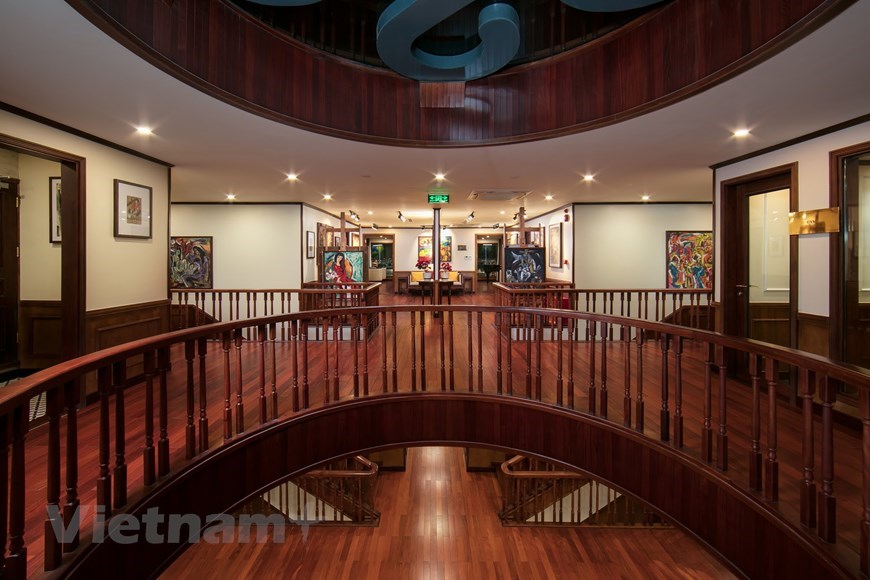 My admiration for Bach Thai Buoi encouraged me, and Heritage Cruises was born. We endeavour to apply his ethical practices and values to bring the heritage of our nation to our guests,” said Pham Ha, CEO of Heritage Cruises. Heritage Cruises’ travellers will follow in Bach Thai Buoi’s footsteps to re-discover the Red River and its delta. This is the first step towards realising Ha’s dream of introducing cruises along the coast, bringing the beauty of the country to travellers. “The encouragement and enthusiastic support of Bach Que Huong, the great-granddaughter of our beloved Bach Thai Buoi, has made us very proud and given us even greater belief in the success of this cruising project in Hai Phong”, Pham Ha shares. (Photo: VietnamPlus) with dozens of paintings by Pham Luc, who has been called the “Vietnamese Picasso”. Pham Ha, CEO of Heritage Cruises, said he realised that paintings and art in general can be the great assets of the country as they reflect national culture and history. “Through paintings, we can understand more about the past and the present, the war, the heritage as well as the life of the Vietnamese people. They are all great features to introduce both Vietnamese and foreign visitors to our art, history and culture and that is why I choose to include these heritage values on my cruises.” 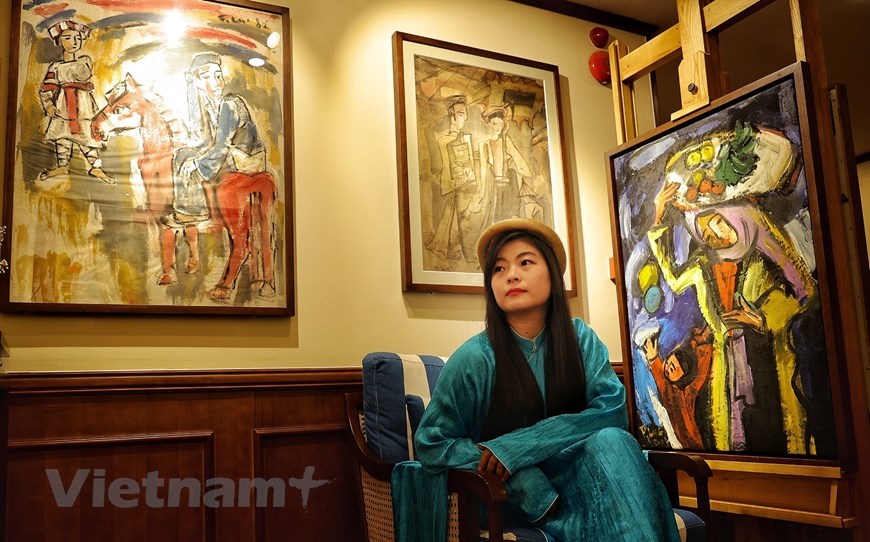 Pham Ha said visitors have a lot of time in their voyage, so they can experience and also learn more about the stories with ethnic values behind those very experiences. Instead of choosing to build the majestic Western-style ships, Heritage Cruises Binh Chuan chooses a true story to explore and express Vietnamese values of art, history, culture, cuisine. This can be considered a continuation of patriotism from Bach Thai Buoi. Since Heritage Cruises Binh Chuan was deployed, many customers have rated their satisfaction level of 6-7 stars on 7-star scale, which marks a remarkable recognition for a product created by Lux Group. 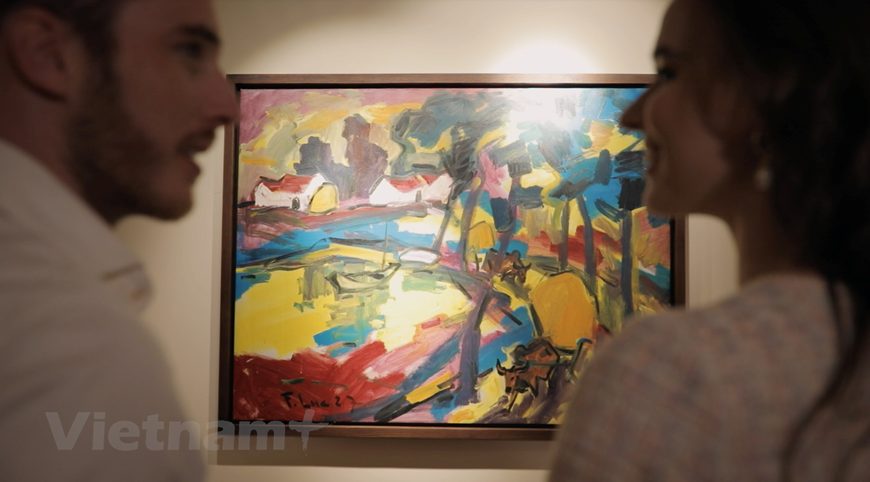 “This is the first time Pham Ha has developed this unique idea and I feel very excited when my paintings are displayed on the heritage space of ‘King of ships’ Bach Thai Buoi.” Pham Luc said. “Heritage Cruises Binh Chuan is specifically designed to give visitors the opportunity to enjoy art in a natural heritage setting.” Pham Luc (born on March 14, 1943) is a Hue-born artist living and working in Hanoi. He is considered as an artist with distinctive style signified by humble and free-spirited imageries, a dark yet warm palette, and diverse mediums. Apart from visual component of his artworks, the beauty of Pham Luc’s paintings lies in the content – romantic emotions, desire for peace and freedom parallel with reminiscence of war. 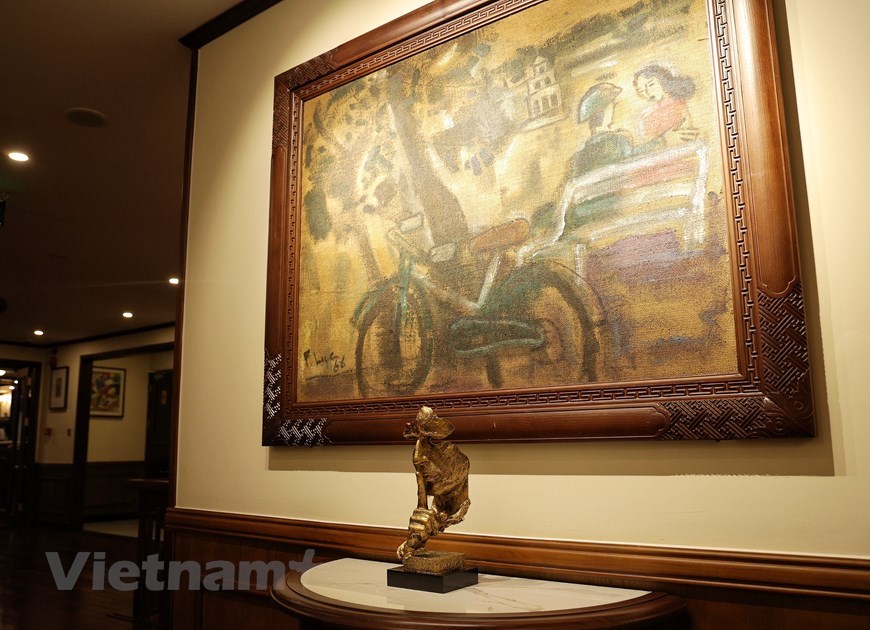 Around 100 of Pham Luc’s paintings, many from the 1965-75 period, are exhibited on Heritage Cruises. Based on a shared passion, Heritage Cruises connects closely with the artist and this is reflected in the overall style, décor, cuisine, wine, music, art and service on board. All these things represent Vietnam. The country is rich in terms of its history, culture, nature, heritage, and cuisine. These all combine to create once-in-a-life-time memories for our guests in the natural wonder of Ha Long Bay, itself a masterpiece. Pham Ha said he has great love for artworks and collecting paintings has been his hobby. Vietnamese fine art contributes to the world art with lacquer paintings and silk paintings, which are also the main types of Pham Luc’s paintings. 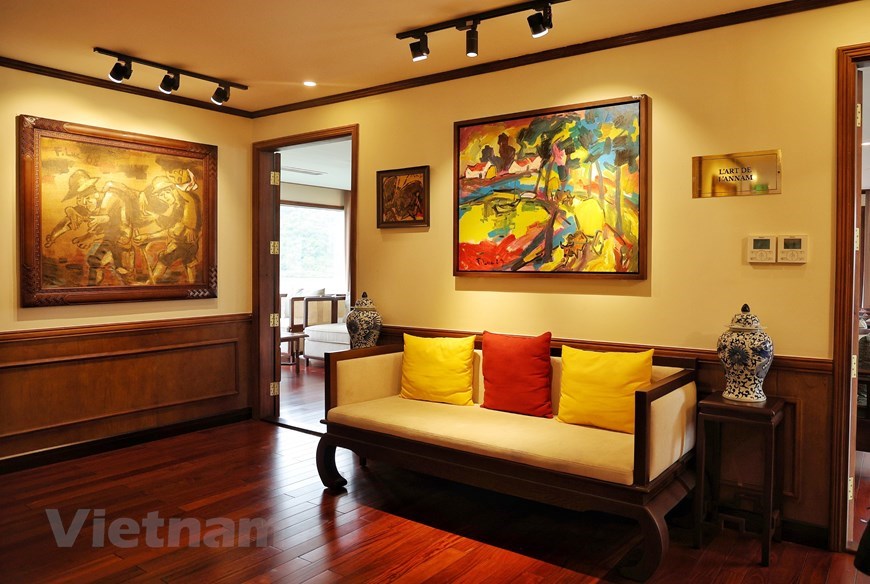 Inspired by the spirit and the ambition of Vietnamese entrepreneur Bach Thai Buoi, who was very famous for his patriotism and business success in the early 20th century, Pham Ha built up his brand Heritage Cruises. This cruise is rich in cultural values and boasts a library with books on Vietnamese culture. On the shelves is also a copy of “Entrepreneurship in Age 1.0”, which tells of the great Vietnamese businessman Bach Thai Buoi. The stories were collected by his family members. Along its corridors, cruise passengers can also admire old paintings, photos, statues, and outfits, all of which are representative of Vietnamese culture. Art lovers on board can visit the first-ever floating gallery in the Gulf of Tonkin, with dozens of paintings by Pham Luc, who has been called the “Vietnamese Picasso”. 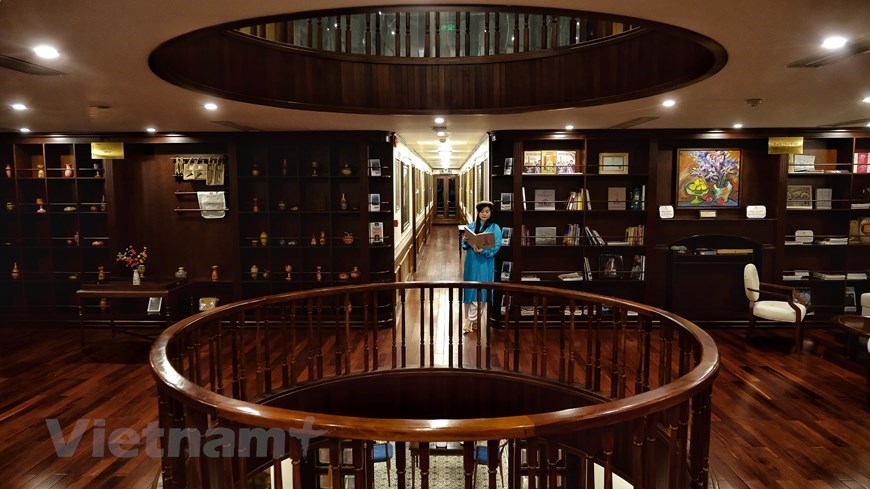 Pham Ha was born and grew up in a rural area in the Red River Delta. Although Pham Ha has become a CEO, he still considers himself a nostalgic person who preserves old values. He said “My admiration for Bach Thai Buoi encouraged me, and Heritage Cruises was born. We make efforts to apply his ethical practices and values to bring the heritage of our nation to our guests,” said Pham Ha, CEO of Heritage Cruises. Heritage Cruises’ travellers will follow in Bach Thai Buoi’s footsteps to rediscover the Red River and its delta. This is the first step towards realising Ha’s dream of introducing cruises along the coast, bringing the beauty of the country to travellers. 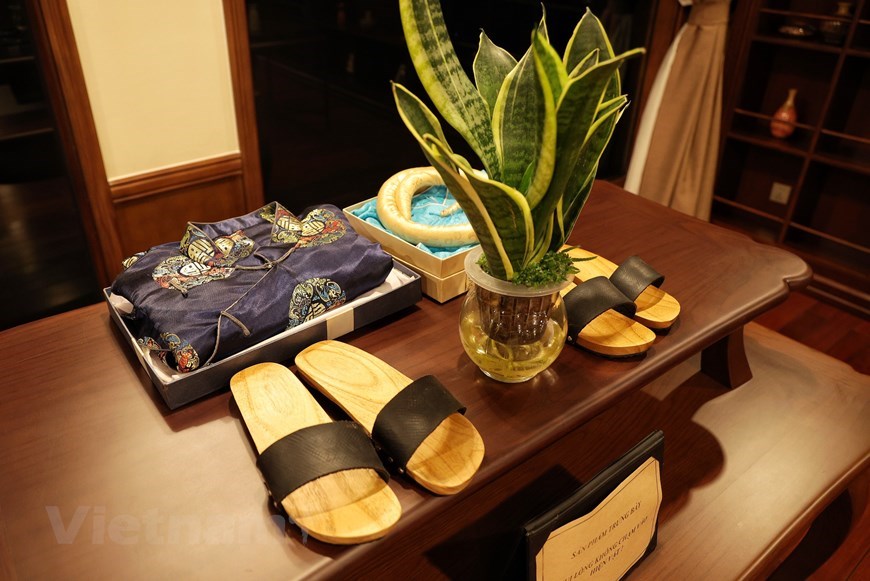 “The encouragement and enthusiastic support of Bach Que Huong, the great-granddaughter of our beloved Bach Thai Buoi, has made us very proud and given us even greater belief in the success of this cruising project in Haiphong”, Pham Ha said. “Huong shares a lot of untold stories, which will help Pham Ha’s team in the compilation of a book they plan to publish about him. She is also helping us to create a library rich in memories as well as a floating exhibition about the life and work of Bach Thai Buoi. At his grave, we promised to apply his successful ethical business practices to Heritage Cruises: kindness, righteousness, uprightness, wisdom, and faithfulness.” 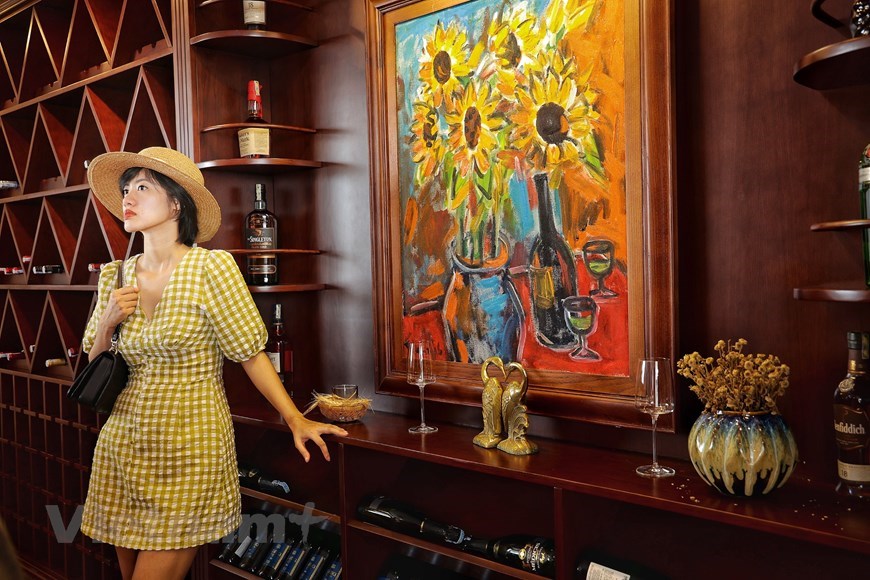 Guided art tours can be arranged as well as occasional auctions. Concierge services are a specialty on the vessel, with a one-to-one staff-to-guest ratio ensuring every need is attended to. Onboard are 40 crew members, including a cruise director and experiences manager. Apart from daily limousine transfers between Hanoi and Cat Ba Archipelago upon request, the Heritage Cruises team can also arrange for private charter airplanes, helicopters or seaplanes. “Our cruises operate from Got Harbour in Hai Phong for the day cruise, with scheduled one- or two-night programs such as the Heritage Discover and Heritage Explorer. In addition, three- to four-night Heritage Expeditions to the former trading seaport of Van Don and private charters for leisure and professionals are available upon request,” said Pham Ha. 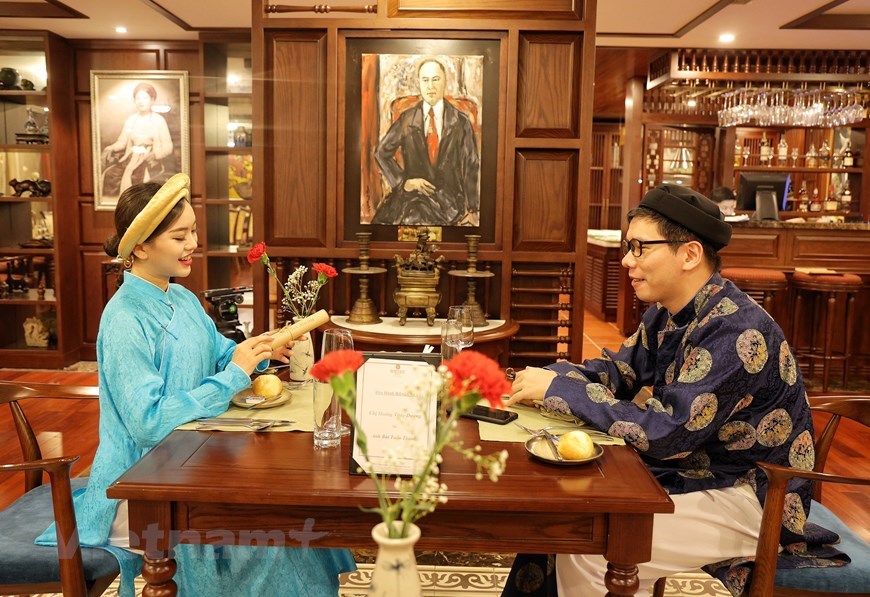 In general, it can be said that tourism and travel has changed my whole life. I have worked in various fields but since I worked in tourism, I am truly happy. I realize that travel is my biggest passion and as I am happy with what I am doing, I can spread it to the entire Lux Group and to the member companies as well. All our teams see customer experience and satisfaction as their ultimate goal in work,” according to Pham Ha. “Passion is also highlighted in Lux Group’s 5P guiding principles, which are Passion, Purpose, People, Planet and Profit. In my opinion, in the tourism and service industry, making customers happy can lead to self-happiness, so I call this a happy career. If you want to be happy, you must do it from the bottom of your heart, make it the way you wish to experience, towards the customer and put the customer’s needs first. Therefore, the core value I orient to my team is always “delivering happiness”. 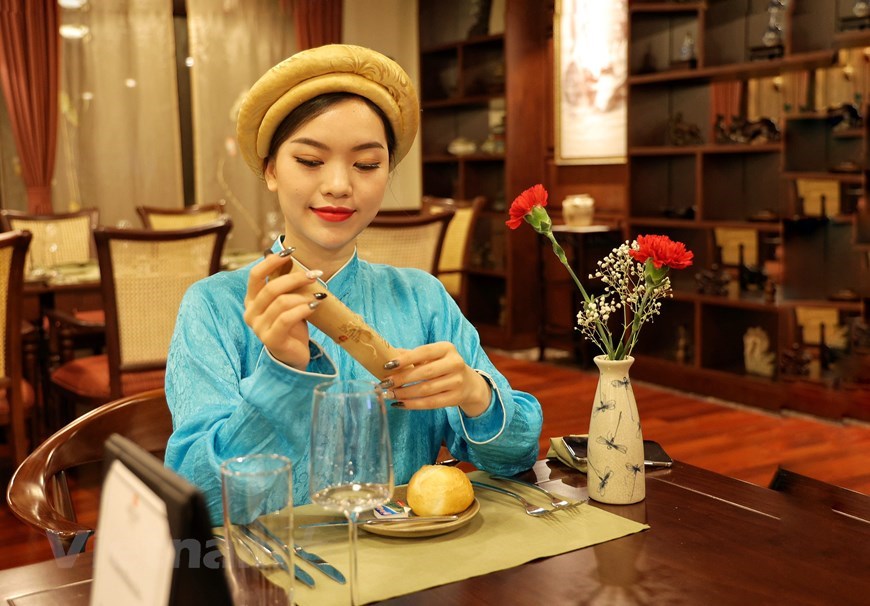 As incomes have continually increased around Vietnam over recent years, cruises have become more familiar among many Vietnamese travellers. But not many know that cruises were first introduced in Vietnam in the early 20th century. Inspired by the spirit and the ambition of Vietnamese entrepreneur Bach Thai Buoi, who was very famous for his patriotism and business success in the early 20th century, Pham Ha builds up his brand Heritage Cruises. This cruise is rich in cultural values and boasts a library with books on Vietnamese culture. Besides contemplating the cultural values found inside the cruise, passengers can also opt for one or more of a range of leisure activities, including kayaking around Lan Ha Bay and soaking up the stunning sunset while sipping on a cocktail.