Home Blog Vietnam in a day

Vietnam in a day

No country can truly be grasped in a single trip, whether it be a foodie weekend, a two-week family vacation, a six-month backpack, or even a multi-year immersion as an expat. Personally, I’ve lived in Vietnam almost 6 years, I’m married to a Vietnamese woman, and I speak enough Vietnamese to get to know people (assuming they can handle my heavy accent), but I still find it requires a lot of effort to dig deep into the culture and history to get a feel for the place. Most trips to the countryside give me the tiniest scratch of the surface into the joys and struggles of the people there and even visiting every significant place of interest in a new city only raises more questions and leaves me wanting more to feel satisfied with my experience. Recently, however, I’ve come the closest I’ve ever been to having an all-encompassing experience of Vietnam and it all took place in 24 hours. 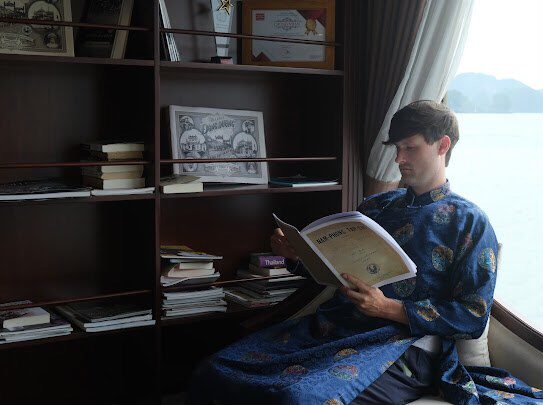 Ok, I know this article is called Vietnam in a day, but really my experience was over the course of 24 hours, and after all there are 24 hours in a day so I’m sticking with it. At noon I boarded the ship named Heritage Binh Chuan (not having a clue how changed my life would be just 24 hours later) and by noon the next day I was back at my port of entry. This particular cruise of Ha Long bay was to celebrate my first anniversary with my wife (I’ll accept your congrats in the comments, thank you, thank you) so we decided to splurge on a luxury cruise, something neither of us have ever considered before this occasion.

The cruise started as any good luxury cruise should, with a welcome from the manager and captain, but before we were even escorted to the dining room for the first complimentary drink and lunch there was one jaw-dropping detail that stood out to us. The first detail which surrounds you is the Indochine interior design. Every inch of the boat has been carefully crafted to transport you back to the time of Bach Thai Buoi, the shipping entrepreneur who revolutionized the Vietnamese shipping industry by leading the movement to have ships designed and built solely by Vietnamese hands. As a history nerd I indulged in the pamphlets scattered about the ship that told of his fight against colonialism and gave greater context to the interior design of the ship. Even someone not as enthralled with history as I am, though, cannot help but be immediately thrust into the French colonial period as the ship is essentially a living history museum with the stylized, wooden decor and early photographs from around Northern Vietnam. 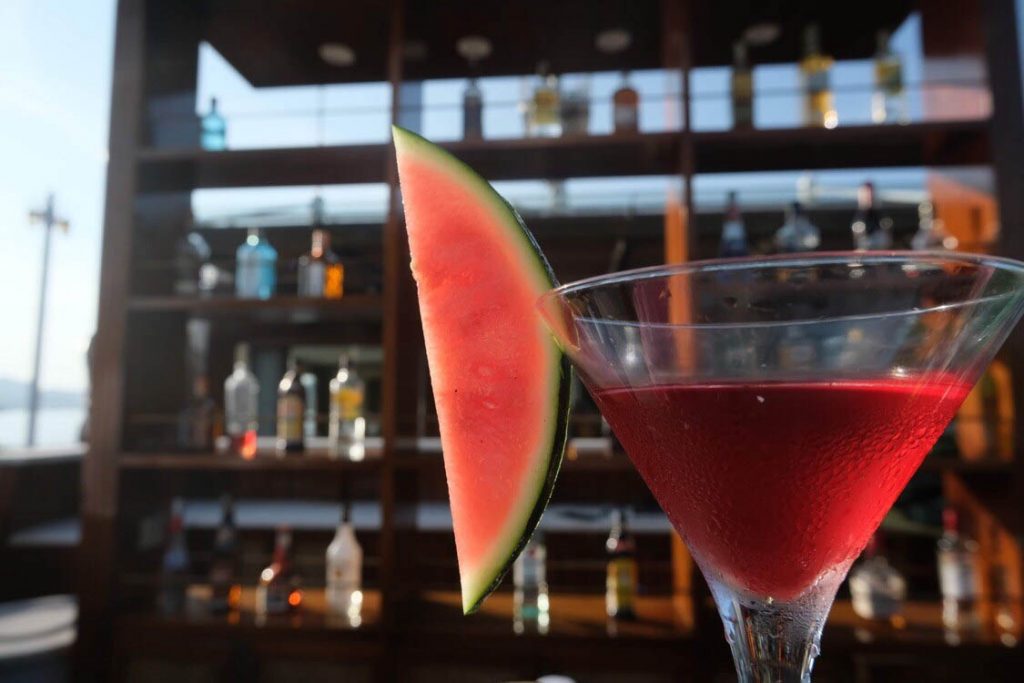 The food served at the lunch buffet was excellent, but paired with the exemplary service from the staff it made the first dining experience on the ship top notch, a standard which the crew upheld the entire cruise. Anyone should expect the food on a luxury cruise to be good so I won’t go into detail about that, but one special touch unlike anywhere I’ve stayed before is the dinner “dress code”. Every room on the ship has an áo dài, the traditional clothing of Vietnam, for each guest in that room and the majority of guests wore theirs to dinner. This is a gesture that says, “You’re not simply WITH Vietnamese for dinner, you ARE Vietnamese, even if just for tonight.” It gives you more than just a taste of Vietnam.

Another set of clothes in every room is the martial arts clothes so you can feel comfortable joining the sunrise Vovinam class, very much like Tai Chi. This class is on the sundeck of the ship, a place that offers far more than this class and even more than any human culture could. The sundeck offers a 360 degree view to millions of years of geology. All throughout Vietnam there is a similar type of geological feature, called karsts, formed from the limestone spread across half of the country. You can see these sharp, jagged peaks that Vietnam is famous for in every province in the north and you drive past miles of them taking any highway through the countryside. The biggest difference is that all these landlocked karsts are visible only from the road, which is the bottom of any karst valley. The sundeck of Heritage Binh Chuan places you many feet above sea level and with this elevated view you begin to get a scope for how widespread this feature is and how influential it has been on the shaping of Vietnamese culture. Luckily the sundeck is not the only place on the ship with magnificent views as every exterior wall in every room, bathroom, library, and gallery is framed with massive windows peering into the bay. The ship, though wonderful, can be described in words, but for the bay I must quote cinema and say, “No one can be told what Ha Long Bay is, you have to see it for yourself.”

Every single outside wall of the ship is a window looking out to the bay, but those aren’t the only carefully considered walls on the vessel. Every inside wall is decked either in early photographs as mentioned before, or something even more stunning, paintings of daily life from around Vietnam. One moment you can be in the Mekong delta and with a few steps across the ship you’re in the living room of a wealthy Hanoian family. You can see scenes of war juxtaposed with traditional musicians. All, or at least most from what I can tell, of the paintings are by the same artist, so the style is consistent throughout the ship. Clearly painted by the hand of a master, they are not realistic, but heavily stylized to put the viewer into a dreamlike state. They are ethereal, yet almost tangible, like the lives of those we’ll never know whose experiences echo into our own. They are windows also, but unlike the outer windows of the ship which look onto the landscape that shaped the culture of Vietnam, they are windows that peer into the Vietnamese soul.

At once, the cruise was modern yet steeped in history, it was artificial ringed with the natural, and it was exciting but tinged with the somber. It was humanity at its finest in the ways that any culture can reach its zenith, however it was characteristic of the Vietnamese in only the ways that they can be Vietnamese. When it came to an end I must admit I was sad, but I did not feel like I had missed or overlooked anything, in fact my wife and I couldn’t talk about much else for the next few days because even then we were still digesting the experience.

Through the sadness of it having ended, I felt incredibly lucky that I live in a time and place where something like that is possible. I feel fortunate that the small price of a ticket could stamp my memory with more than just a trip or a taste of luxury, but it could allow me to know a place, and even more importantly, allow me to know a people.